End of Year by Rabindranath Tagore

Today as I reached the silent peacefulness of this place, away from the clamor of the capital’s human assembly, the sky was covered in evening’s glow. Cloud clusters had lent a soft hue to the green of the forest by placing shadows on it; had I stayed in the capital, I couldn’t have seen so clearly, this face of the year’s last day that I saw here. There, a covering of whirlwind encircles everything; that covering hides the united form of beginning and end in creation. The music of human life needs to pause for returning to the start again and again. But amid the cacophony of crowd one feels that taan* after taan carries on, there’s no returning to the first beat. There, man moves with the crowd’s push; that movement is devoid of rhythm…When evening descends on a city, it can’t reveal itself, the day’s noise barges in to choke its voice. Daytime’s labor looks for crude excitement in evening’s leisure.
Tired of body and mind, I had thought I wouldn’t get entry into the year’s last day today. Suddenly, thick clouds caressed the woods; the expansive bliss spread across the horizon didn’t appear as emptiness, but as beauty. I see this evening filled to the brim with the wholeness that rests within the endless stream of the world’s work. In meditation I realized, that which I know as the end in the outside world, hides the seeds of new life in this place. 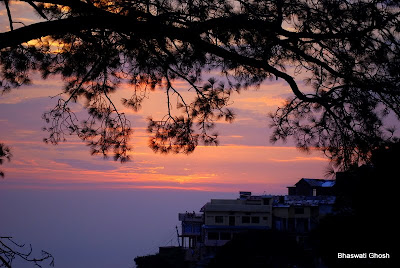 In every moment I see that life’s entire prosody is contained within conclusion. Without pause, rhythm would lose its identity…In mankind’s history, several civilizations have vanished after a period of grandeur. The reason was that those civilizations had lost the pause; they only scattered their enterprise, didn’t care to pick up the same…So the rhythm broke. The first beat came back in the wrong place, and it wasn’t cessation; it was destruction.

It is my good fortune to have come here today. In the city from which I returned, the evening’s face is that of frenzy, not of well-being. There, death’s identity has lost its solemnity. Human habitations make every effort to deny death. That’s the reason one can’t see the truth of death in such places…

May the end show us that face of liberation, which contains wholeness. Calmly I say, “Dear End, within you resides the infinite. I see in your eyes a trace of tear on this last day of the year; separation, dejection, and weary melancholy eclipse dusk’s darkness. Despite that, assimilating and crossing over all those, I hear your voice within and without. Om. The heart’s pain has only lent it beauty—tears haven’t dulled it, but made it gentler. Every evening, death reveals its calm and graceful face across the immense star-draped sky. Embracing it, we lay down—relieved—all the day’s burdens.

At the end of the year, I see that same vast face resting on the untiring, imperishable throne of darkness. I pay my obeisance to it.”

* Taan is a virtuosic technique used in the performance of a vocal raga in Hindustani classical music. It involves the singing of very rapid melodic passages on the syllable "a." It is similar to the technique ahaat, used in Arabic music. [From Answers.com]