Song of the Red Road

An unbound auburn road bears songs not washed away by the gust of time; songs the sage poet sang to extol the road’s hypnotic effect on the weary traveler’s mind. The road lives, the songs live, too. The road and its songs are one now.

That ruddy road down the village makes my heart stray.
Who does the hand reach out to, only to roll over the dust? The road makes its own way, unrestricted and haphazard and comes to meet its friend, the giant banyan tree. She knows the sun likes to play behind it, splashing its gleam through the banyan’s curtains.

When I first met that banyan tree, its leaves were the green color of spring. The sky’s fugitive light would flash through its gaps and embrace earth’s shadows on the grass. After that ashadh’s rain came; like the clouds its leaves became somber. Today the pile of leaves is akin to the mature intelligence of the elderly, no outside light can pervade its gaps… This morning, she said to me, dangling her enormous emerald necklace, “Why are you sitting with all those bricks and stones on your head? Come all out in the open like me!” After sharing her pleasure-pain tales with the banyan, the red road curves toward the shal forests. There, inebriated trees oscillate on the wayward wind’s notes.

This felt nice, this dance of light on leaves
The wild shalbon storm makes my heart quiver.
Haat commuters dart through the auburn road,
A little girl sits alone on the dust and spreads her toys
All this that I see before me strikes the cords of my heart’s veena. The sun has stopped its play for the day. Dusk joins the red road as she makes her way to commune with her people—those who know the soil and the forests as dear friends. Santhal villagers greet the road with their earthy smile and rustic songs.

The Santhal girl comes and goes
through the pebble-strewn road by the Shimul tree.
A thick sari tightly wraps her dark, slim body.
One of god’s absent-minded artisans
must have lost his way while creating a black bird
and perusing ingredients from monsoon’s clouds and lightning
fashioned that woman. Then night comes—with the glow of intermittent fireflies flickering through the invisible marshes along pale green ponds. The auburn road doesn’t stop. It continues to sing—all out in the open—where day and night, past and present, work and play are enmeshed with the One.

All of the above is a languid reminiscing of my journey to Shantiniketan in March.

Posted by Bhaswati at 8:55 am 7 comments 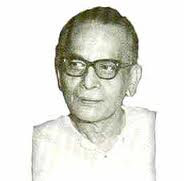 Great storytellers often tell stories that can be adapted for big and small screens. Some write with that idea in mind, others just spin the yarns they must. While the unceasing debate on how sincere the moving picture adaptation is to the written work carries on, I have to admit, I came to know quite a few writers via the moving images. Subodh Ghosh is one of them.
As a regular follower of a televised series of short stories by different Bengali writers aired on one of the Bengali channels here, I noticed the stories that particularly drew me had one thing in common—their author. Subodh Ghosh’s stories would prick the psyche for days, even while other stories had an impression life of just a few hours. Thhagini or The Con Girl was the first of these stories. When I saw it, the story stunned me for its original approach to the oft-done theme of deception. In the story, a father-daughter duo lives off deceiving unsuspecting victims. Their trick is simple—they pose as a family facing abject penury, the father unable to wed his very marriageable daughter. They keep changing neighbourhoods, carrying along the same story. In every area, some kind man takes pity to their situation, and the girl gets married, usually to a prosperous man. Within the next couple of days, she smartly flees the place, not without the cash and jewelry she begets as the new bride. This keeps happening, and even as the police are desperate to catch the father and daughter, Sudha, the girl, actually falls prey to the love of her third “husband”. In bittersweet irony, she flees again and deceives again—only this time, she runs with her husband and cheats no one else, but her father.

Although I thought Thhagini was the first Subodh Ghosh story that moved me to read more of his work, it turns out he had made an impression on me long ago. In the form of Ijazat, Gulzar’s sensitive adaptation of Ghosh’s Jatugriha (Lac House). Later, of course I would watch the Bengali screen version of the film directed by Tapan Sinha, starring Uttam Kumar, equally sensitive and closer to the original story. And years before that, the thoughtful Bimal Roy made one of the finest films out of Sujata, a novel by Ghosh of the same name. To date, Sujata, the film, remains one of my favourites for its perceptive handling of the issue of caste prejudice and for Roy’s delicate portrayal of a woman’s emotions.

Not just Tapan Sinha, Bimal Roy, and Gulzar, but even Ritwik Ghatak turned to Subodh Ghosh’s work for one of his films—Ajantrik. As little as I have read of Bengali literature, Subodh Ghosh got my vote, thanks to the wonderful screen adaptations of his stories by these brilliant directors.

As I read through an anthology of Subodh Ghosh stories, I am impressed by the realism, the extraordinary insight into the quirks of human nature and the way they play out in relationships, and one of the best weapons of a writer--a deft touch of irony.

A city of bizarre contrasts, Kolkata doesn't let a visitor go without evoking strong reactions. One moment you hate the city with fuming rage, the next second you feel affectionate toward it. Among the things that make you cling to this enigmatic city is the opportunity to eat good food at no great loss to your wallet. Is a vignette of Kolkata's glorious eating traditions, going back to when the city was Calcutta. More than 80 years ago by Mr. and Mrs. J. Flury set up this British-style tea shop in the eastern Indian city. The building was renovated a few years ago and stands in the heart of Kolkata's downtown--the pulsating Park Street. "Do try to keep an evening free for coffee at Flurys," I had been advised. Most of the trip had gone by without heeding that advice. As we entered the last week of our stay in Kolkata, I grew fidgety. How could I leave without eating at Flurys? I had been planning this for months. So one humid evening, we set out to discover the British eating experience. Taking the metro to Park Street meant we literally had to work up an appetite by walking a fair distance as evening wore down to dusk. Once inside, the trek seemed worthwhile. The atmosphere is elegant yet informal. A great venue for relaxed conversation and some delectable bites. I ordered a cup of cappuccino, a cinnamon roll and a chicken patties. Hey, I did say I walked long to reach this place. I deserved to indulge a bit, did I not? Both my choices proved delicious. The roll was a fluffy, crispy dough, packed with raisins and nuts and smeared with powered sugar on top. The patties wasn't dripping in oil, yet, packed with wholesome minced chicken cooked to perfection. Flurys has an extensive cakes and pastries collection, along with European chocolates. I am not much of a sugar addict, so I didn't buy any, but these are highly recommended for those with a sweet tooth or two. An evening well spent and tucked neatly into the memory files. As I passed by the gossamer reflections of a Flurys evening, I thanked my advisers.

Posted by Bhaswati at 7:23 pm 7 comments