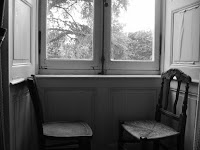 Capturing the life, sensibilities, and works of a person—that’s what biographies and autobiographies are made of. But could there be another way to bring to life the essence of an individual? If the book I am reading these days is anything to go by, the answer is yes, emphatically at that.
Shilpi Ramkinkar Alapchari or In Conversation with Ramkinkar by Somendranath Bandopadhyay (review promised later) is an amazing read. An intriguing glimpse into the mind and heart of one of India’s most revered sculptor-artists, the book is neither a biography nor a series of interviews; yet perhaps it is more than either. The curious thing is that the book cannot be strictly classified into any type. Like Ramkinkar Baij’s life and art, it transcends stale definitions. As I read through this informal set of dialogues the author and the artist shared over the course of a year, I wonder what is it that keeps me—someone who has no background in visual arts—so hooked to the book? I have nailed some of the reasons:

1) Interesting subject: For me, this is the strongest aspect of the book. The author chose to record his interactions with a person who has such an original voice that is sure to pull a reader. Ramkinkar’s free-spirit, touching diffidence, ability to remain untouched by both praise and censure of the highest order, and his child-like innocence and absentmindedness—all these make him so “approachable” for the reader. The author does an admirable job of bringing Ramkinkar as he was, mainly because he keeps the sculptor’s voice intact.

"To tell you the truth, I have found everything from life—no less than twelve annas, could be more. All these things that surround me, the fields, village people, the everyday life of Santhals—all this. Just see all the drama that goes on through the year. Keep your eyes and ears open—and see—fill your two eyes to the brim—soak in all you want to. How much can an artist take during his lifetime anyway?"

2) Distinct voices: Another facet that makes this ongoing conversation so engaging for the reader is the difference in the author’s and the artist’s voices. Bandopadhyay has done a superb job of distinguishing the two voices—his own marked by cultivated sophistication, Ramkinkar’s by unrestrained expression. This only fits the nature of the book—telling us two different people are talking to each other about a shared interest.

This morning, I am a bit late in coming to him. I enter; a little ashamed. He is looking for something. Every now and then, his hands reach under the pillow. Hearing the sound at the door, he looks up. A lost look.

“Where did it go? I’d kept it here only. Saw it in the morning too. Just a while ago.”

“What is it? Have you lost something?”

“A two-rupee note, my dear—red note, small. Trouble is, there’s no bidi. The container is empty. I think there were some bidis in it. Vanished.”

No, Kinkarda’s said red note is nowhere to be found. I search everywhere. At last, a torn-cover notebook comes out—from under the bed sheet. If anywhere, the note has to be inside it. In between the folds of small chits. One says “two matchboxes,” another “Charminar—1 packet." The dates are very old. Suddenly, I notice a folded red something. Yes, it’s money. Not a two-rupee note, though, but a cheque. After the first figure, multiple zeros stand in a row. But the date? Like in those chits, it elapsed long ago.

“You found it?” Kinkarda eyes it, too. His animated eyes gleam with the joy of discovery.”

“Oh, I thought we found it.” Kinkarda becomes frustrated again.

A fat-amount cheque lies in neglect under the covers. The man is restless over a small red note.

The bidi arrives, though. The co-operative store is right in front of his house.

With a gladdened heart, he rotates a bidi in his fingers before putting it into his mouth. Shaky fingers light a matchstick. He releases the smoke in a long, satisfied swirl.

“What’s that book in your hands?”

He looks at ‘Rima’ intently. Then, ‘The Day and the Night’. For a long time. The bidi smoke keeps ebbing out, until it disappears. He dumps the unconsumed dying bidi in the container and holds the book up with both hands.

“Do you see what he has done?”

Loving respect lights Kinkarda’s face. His eyes run over the sculptures so familiar to him, as if he is shedding affection on them with his joyful glance.

3. Author’s passion for the main theme: I believe that’s the basis of this conversation. The author, in spite of serving as a professor of Bengali literature in Shantiniketan, happens to be a passionate art enthusiast and has written an important book on Tagore’s art. His conversation with a great sculptor becomes so lively only because he himself is a lover of the subject and has studied it deeply. The author shows a fine appreciation for Ramkinkar’s works and doesn’t shy away from sharing his unease over a few finer points of some of the sculptor’s greatest works.

“I really like that work (The Storm) of yours. I like it because of its stunning vitality. The pulse of life in the two girls’ figures is of course there, but what really astounds me is the soft smile in that hard rock…

But I have a doubt, Kinkarda. Been having it for a long time now. I have thought of talking to you about it. Couldn’t muster the courage. Now that I have the chance, may I?

That boy’s figure. It feels as if it has been forcibly added. I have seen it carefully a lot of times. Tried to understand the work. Somehow, the boy’s figure isn’t in sync with the rhythm of the women’s figures. Even though I like the figure, I like his stance.”

Kinkarda keeps quiet. For a long time. He must be thinking of something with closed eyes, or revolving around his creation in his mind’s eye. 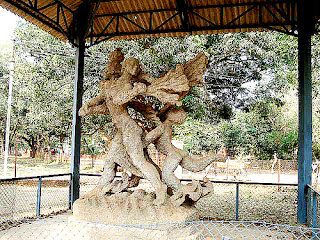 “There’s vitality in the boy’s figure, too. But I can’t totally dismiss your observation, my dear. No, no, you are right. Right you are…

The folds behind the girls’ saris’ ends—do you know how much those weigh? They are loaded with iron and concrete. It’s very difficult to keep them floating. You are seeing the end is flying; you see it with light ease. And me? I had sunk under the pressure of those folds. How do I keep those ends flying? A sculptor has to think about these practical things. I was harried with those sari ends. Ha, ha, ha. In the end, I added that boy. It’s a support. I even gave him my flute. To stand there, touching the sari ends.”

4. Description of setting: The author’s literary bent comes into full view when he recounts the atmosphere in each chapter. Not just the surroundings, but the atmosphere of Ramkinkar’s face, his typical mannerisms, his loud laughter—all recreate the different hues of moods the author had experience as he chatted with the genius sculptor.

He sits in the front room by the small slice of verandah. Sitting, sleeping—all in this room. The door is ajar. It stays like that all the while. Looking at the near dark, silent room it’s hard to believe Kinkarda is here at the moment. Can he ever be compared to this deafening silence?

The very mention of this name brings up so many images in the mind.

Kalabhavan premises. Kinkarda sits under a tree during some free moments off his teaching. A bunch of curious students from different countries huddle him. A thunderous guffaw booms out of this engrossed assembly and stuns passersby.

Kinkarda stands on an elevated platform. He wears a saffron lungi, a tal-leaf toka on his head, his lips sealed. The tireless hammer and chisel in his hands break the afternoon stillness. A newly-born sculpture faces him with a hard concrete body. There’s no measure of time.

Is it any wonder that the more I read this book, the more I feel I know Ramkinkar, the free man, the marvelous sculptor, intimately?

Bhaswati: For those of us uninitiated in India's history and culture, your writing opens new horizons, the latest with Ramkinkar Baij and his sculpture standing against the sky as your words flow over us in gentle waves. Thank you.

I have to say, I've never been a fan of biographies, but your writing of Ramkinkar Baij has really intrigued me. I must echo Sid's remarks as well.

Hi,
I had heard about this great sculptor of India but I have only started to know him from your so well written book review. I think such individuals are rare in this world.
Cheers!

Thank you for the introdution to Ramkinkar — I am fascinated. :)

Sid, I am glad I could share. Thank you for the lovely comments. :-)

Oni, what makes this book different from conventional biographies is its informal tone. Here you just see two people chatting up, and before you know, an entire universe unfolds before you.

Abhay, I couldn't agree with you more. A mine of unadulterated gold--that's what Ramkinkar is. :)